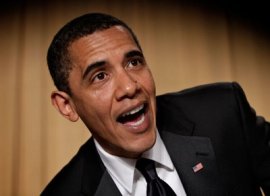 WASHINGTON – What began as an exciting night for the paparazzi has grown into something much larger.  The Correspondents Dinner Comedy Tour – What Grinds Obama’s Gears, is now scheduled to take place in seven major US cities until July, allowing the President a few months off that he feels “would really be fun”.

Poking fun at Republicans in Congress, the media, and his critics, Obama’s show will turn your stomach sore from laughter.  But don’t think our nation’s leader is one sided, with a spirit he willing deprecates himself with jokes like, not being “the strapping young Muslim socialist that [he] used to be.”

“After the White House press room this morning, I was like, “fuck it””, commented the President when being asked why he wanted to extend the comedy tour dates.  “With Republicans and Russians not giving me exactly what I want, I should just pack up and go home”’.

With hopes of getting back to his roots – public speaking, charisma, and acting – the President is greatly looking forward to performing again in front of more of the nations top performers.

–       Former US Presidents Shamefully Take Presidency Position Off Their Resumes