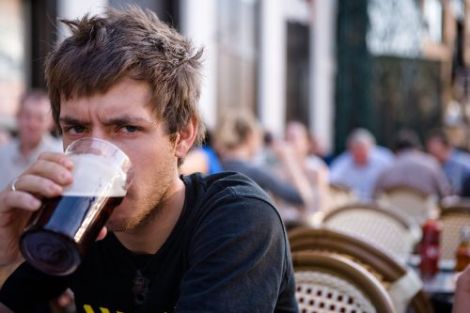 BOSTON, MA – Once Boston University student Samuel Nielson nearly stopped going out during the spring semester of 2013, he was certain that he had taken the next step to adulthood.  However, after attending an ‘Anything But Clothes’ party last night – where he broke a friends nose and tried booty-calling his T.A. – Nielson told reporters that he in fact had not matured one bit, but instead had just been really bored.

“After almost four years of every week going out to T’s Pub, Whitehorse, TITS, and the occasionally club, I was starting to get burnt out”, mentioned Nielson with eyes half open in his bed at 4:30pm this afternoon.  “Coming back to school after Christmas break I just kept going to these same spots, but they didn’t feel the same – I wasn’t having the same fun I once had.”

Expressing his feelings to family and close friends, many of them suggested that he was simply maturing.  At first Nielson believed them, and began focusing more of his time on job searching and replacing bar nights with dinner parties; however, after a month of self inflicted torture, he was certain that the advice he had believed was terribly wrong.

Now putting the abstract concept of maturity once again on the back burner, Nielson is confident that he had simply been really bored from constantly going out to the exact same venues.  “It’s amazing what we can convince ourselves of – maturity! [he laughs] fuck no!”, commented Nielson while group-texting his friends about day drinking at a few new bars in Cambridge on Monday.

–       Student Continuously Tweets About Studying For Finals to Avoid Studying