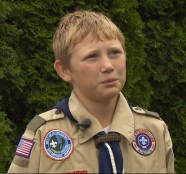 KENSINGTON, MD – After just three days of having the centuries old ban on openly gay boy scouts lifted, openly homophobic scout Troy Cook (13) has begun to feel discriminated against by his local troop.  Having been a scout for nearly half his life, he had always felt comfortable being himself amongst the troop.  Now though, due to his fellow scout Pascal Tessier becoming the poster child for openly gay boy scouts, Troy feels that he is being pushed away from the community he loves because of who he is.  “I did not choose to be homophobic”, mentioned a noticeably downcast Troy, symbolically hanging his sash up in a closet.  “It is just who I am.  I’ve tried to change; I even ate lunch with Tessier at school, once.  But I need to be true to myself.” At press time, reporters saw Troy being reprimanded by his father for his moral wrongness, screaming in tears “You [Troy] are no son of mine!”