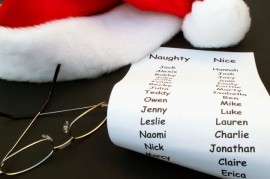 WASHINGTON, DC – In response to the uproar that resulted from the government surveillance program Prism being publicly disclosed, the Whitehouse has issued an apology that promises to forfeit the Verizon phone data that they had unconstitutionally taken. However, the administration has not giving up on their relentless pursuit of fighting terror just yet. In a homeland security conference yesterday the president publicly declared his administrations latest strategy. “This morning we dispatched a small team of negotiators and military officers to the North Pole, their mission to is to find Santa Claus”, said the president. When asked how Santa could possibly assist in protecting our nations security, Obama responded, “he knows when you are sleeping, he knows when you’re awake, he knows when you’ve been bad or good, so we want to know exactly what he knows.” With the goal of acquiring the Naughty or Nice list, the Whitehouse argues that since our constitutional rights do not extend to Christian Saints, using Santa is the most effective, and legal, strategy to finding out everything about each of its citizens. “Depending on how the negotiations go we may or may not see another Christmas. But rest assured that if Mr. Claus is compliant we will have taken another great step against terror – knowing everything about what everyone is doing at anytime.”

– Anarchist Blogger Prays that People Will Read His Posts