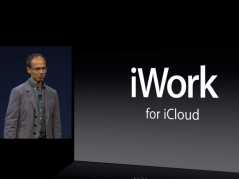 SILICON VALLEY, CA – After last month’s discovery of Apple’s extensive subsidiary network set up for the sole purpose of minimizing their corporate tax burden, the US government has asked the company to reimburse them for the approximately 6 Billion dollars in lost tax revenue.  However, since Apple’s tax strategy had been working within the law, acceptance of the government’s request is completely dependent on the company’s goodwill.  That is why Apple has decided to not reimburse the US with cash, but instead design for it an economic stimulus program that features the same simple and intuitive design that has made Apple so successful.  The iWork Stimulus Program is one that sets out the economic benefits that result from encouraging Americans to engage in employment.  By explaining in a friendly tone how relying on tax money to financially support its citizens is an unsustainable and crippling strategy, the program lays out the idealistic concept of a free market economy and how Americans may benefit from embracing it.  Furthermore, it states that similar to how Apple found a creative method to minimizing their tax burden, other company’s will do so as well – especially if new social taxes continue to be enforced.  At press time the Whitehouse publicly assured the nation to not panic and that Apple was both immoral and out of touch with the real world.

– How Poverty Saved my Health